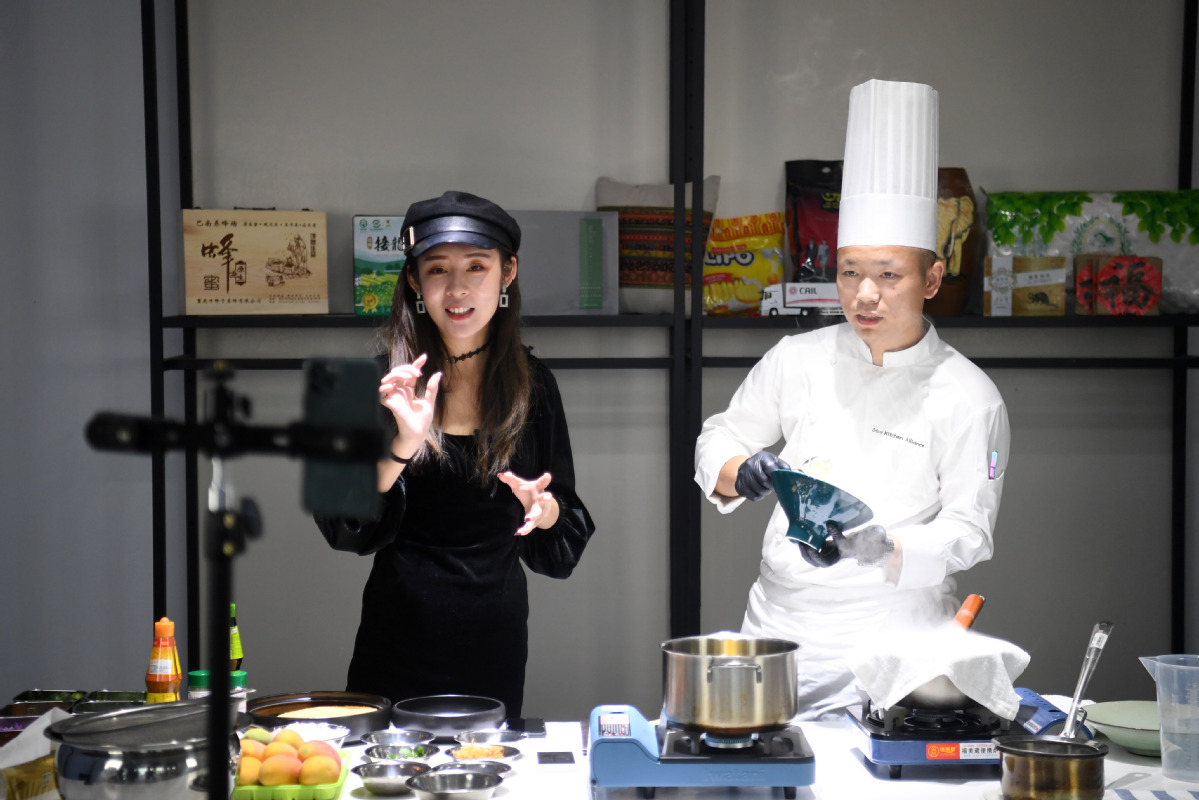 A chef in Chongqing promotes local cuisine via livestreaming with the help of a host at a market in Chongqing, which was set up last year to help exchanges of goods between western China and the Association of Southeast Asian Nations. [Photo/Xinhua]

The upcoming 18th China-ASEAN Expo will facilitate China and the 10-member Association of Southeast Asian Nations to further diversify trade ties under regional free trade agreements, and support the recovery of the global economy, said senior government officials on Thursday.

The event will be held in Nanning, capital of Guangxi Zhuang autonomous region, from Sept 10 to 13. The exhibition will hold 27 high-level forums, covering sectors from green development to digital economy.

This should help deepen the cooperation between the two sides, said Liu Hongwu, Guangxi's vice-chairman.

Liu also said the expo's organizers have invited exhibitors and purchasing agents from Japan, the Republic of Korea, New Zealand, and other signatory states of the Regional Comprehensive Economic Partnership, to participate in the expo this year.

With a total floor area of 124,000 square meters, the expo will have a dedicated RCEP display zone and organize training workshops themed on the agreement details, to facilitate early implementation of the RCEP.

To deepen economic cooperation between China and the ASEAN,China will promote regional economic integration and the implementation of the RCEP agreement, as well as further regional interconnection of RCEP members in the next stage, said Ren Hongbin, assistant commerce minister.

"In addition, China will expand trade and investment cooperation with the ASEAN, by expanding the import of high-quality agricultural products from the region, enhancing cooperation in emerging industries and new business forms, supporting Chinese companies to invest in ASEAN economies, and building a closer industry chain with the bloc," he said.

Benefiting from the complementary goods trade structure, easing of the pandemic and vaccinations in the ASEAN region, China's trade with it soared 38.2 percent year-on-year to $410.76 billion in the first half of this year, according to the Ministry of Commerce.

In addition to minerals, precious and base metals, and agricultural products, the bloc's exports to China include natural rubber, timber and materials of textile and garment goods.

"The close business ties and FTAs, including ASEAN-China Free Trade Agreement, will facilitate the two sides to better integrate resources in the coming years, and build a high-quality service platform to restore both regional and global economic growth," said Zhang Shaogang, vice-chairman of the Beijing-based China Council for the Promotion of International Trade.

Owing to epidemic prevention and control requirements, which are similar to those seen last year, the expo this year will combine a physical trade show with an online version.

Its online platform will be running all year round, providing companies with business promotion services on a regular basis.